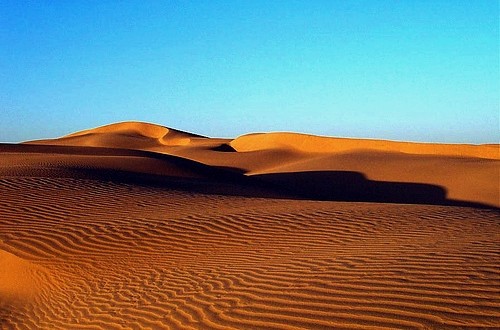 Previous Next
← previous day next day →

The Thar Desert, also known as the Great Indian Desert, is a desert located in western India and southeastern Pakistan. It lies mostly in the Indian state of Rajasthan, and extends into the southern portion of Haryana and Punjab states and into northern Gujarat state.

Benj, Superb... The tones and the contrast levels...

@Sriram: Thanks you very much Sriram!

This is absolutely beautiful ... the colors are gorgeous!

@badala: Much appreciated Badala! Thanks for dropping by...

Breathtaking shot of the nature ! Thanks for sharing ;)

@Kheoh Yee Wei: Thanks for dropping by! =)

The colours, the lines, the contrast. Excellent!

perfect light, well done, any PS here or not?

@Dimitrios: Thanks! Slight tweaking, but not PS, I used "paint net" to raise the colors a bit...just a slight tweak though, I was after the feeling I had while I was there and this about nails it. Such an "otherworldly" experience all the way around.

Lovely colors and details in the sand.